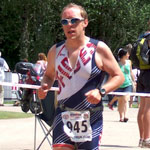 This feels like a stupid question but I'm going to ask anyway. How do I bike faster!

I did my first ever time trial last night, it was a 8 mile event and I put in an official time of 27:49, being 25th out of 27. I think I can immediately gain some time and maybe places by warming up properly, I was freezing at the start and did not feel comfortable until about 3 / 4 mile in, by that time the damage was done, being past by a few people, including some 12 year old! Whom I started to catch towards the end!

I managed a avg pace of 17 mph and a avg cadence of 79. I tend to bike in the big ring at the front and a lower at the back, mainly because this is what feels more comfortable.

I'm looking for advise on speeding up in general and also what should I be doing in terms of warm up before such a event?

Thanks for the advise