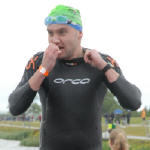 Flavadave Posts: 749
June 2009 in General Chat
I use Armadillos for my commuter and haven't had any issues with taking them on and off. I found that these tyres offered as much puncture resistance as the gator skins to.
0