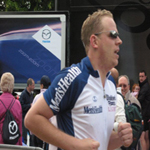 I trust most of you have one? What did you get and why? Does it work in water? Any reviews or advice would be awesome