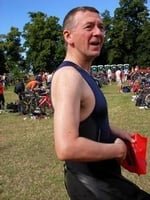 Because of the numbers the men’s start was in 2 waves, the young and fit i.e. Juniors and Seniors in wave 1 and 2 minutes later the Vets in wave 2

Those who may have seen my postings on the subject know the swim is my weakest discipline, in my first 2 OW events I emerged half drowned after 20 minutes, my third (at the 2008 Nottingham Tri) I was mightily pleased to emerge lungs empty of water after 17:43 and this year the Sth Cerney was feeling good after completing in 17:15. I was hoping that I might just about crack 17mins and plonked myself at the back where I would cause minimal disruption to everyone else. Within a few hundred metres I had not only started to pass other Vets but also start to pick off some of the first wave. Emerged from the water feeling excellent in 15:30! Must be down the the Seal goggles that Jesster gave me – mwaa – kisses to you. Trotted up to the timing mat in 16:05! OK I know this is a mediocre time but I was so fired up (post race realised that if I had positioned myself better I would have achieved a sub 16 time).

T1 - slow as ever, this I really need to work on not helped by being racked up at the far end and having to run/slither my way through bikes being unracked and muddy deposits underfoot - excuses over I am too slow on T1 - need to improve.

Bike - whoohoo. What a ride, loved it. Holme Pierrepont is a water sports centre and the bike is 4 laps of the rectangular 2000m regatta lake. My Focus Izalco performed flawlessly, I was overtaking Vets and Wave 1 on the home straight, keeping up with the road bikes at the turns and even managed to overtake when battling against a stiff headwind - that was a sod - the windsock was horizontal! Purely by chance every time I went past the grandstand I was overtaking someone not because anyone was cheering me on but simply the atmosphere is electric and made me put that extra bit in. It was also gratifying that the only ones who overtook me were ones that should have done i.e. younger guys on half decent bikes. Completed in 38:12, again nothing to shout about, about midfield, about 1:30 or so slower than last year - that wind - blimey!

T2 - again another long trot of about 100m before I could rack.

Off on the run, my strongest discipline, we set off in the opposite direction of the bike circuit, part of it being cross country. Again I was picking away at places and even pulled back on a couple of Seniors that I knew were in the Forces so pretty chuffed with that. I was only overtaken 3 times and completed in 23:37 which was about 1:30 faster than last year.

OK I will now go away – but I just had to share my feelings – what a buzz – I just love this sport. – Oh yes and because the Women’s event started 2 hours later I watched my first ever triathlon! Well done girls I enjoyed it.
0