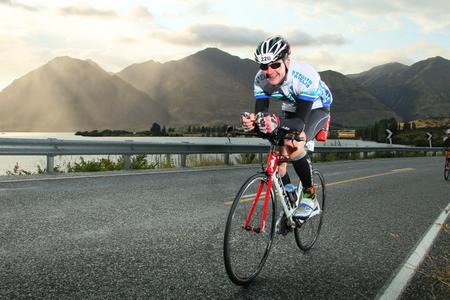 Biggles Posts: 14
January 2013 in Race Chat
Challenge Wanaka is a long distance triathlon (3.8km swim - 180km bike - 42km run) in New Zealand's South Island which has been on my "must do" list for a few years. The previous week had seen heavy rain (and snow) in the area so the lake was very high (and very cold; 15.3 degrees). Thursday morning I took the opportunity to have a short swim in the lake to steady the nerves; see just how cold it was and test out my recently purchased neoprene swim hat. All went well but noted that with cold hands and feet after only 10mins in the lake it was going to be a slow transition to the bike leg! Then time to put the bike back together (note to self: remember how many headset spacers go above the aerobars next time!!) In the afternoon, number #1 supporter and I went for a short run along the lakeside trail which forms the start of the two lap run course. The whole course is impossibly scenic and is a great distraction during the event.
The briefing was held on Friday morning where we were informed that the section of the run course alongside the Clutha River was still flooded and we would be running a modified two lap course. A pity as this section of the trail is the most scenic part of the run (i.e., its even more impossibly scenic than the lakeside section). The elevation gain/loss was unchanged so although we weren't running up Gunn Hill, the gravel trail that replaced it was just as "entertaining". In the afternoon we drove the bike course - highly recommended to gauge the hills but this did nothing to calm my nerves. There are virtually no flat sections on the course and although there are only 3 or 4 notable hills the combination of rough chip roads, rolling hills and strong winds meant that it was going to be a tough ride.
0